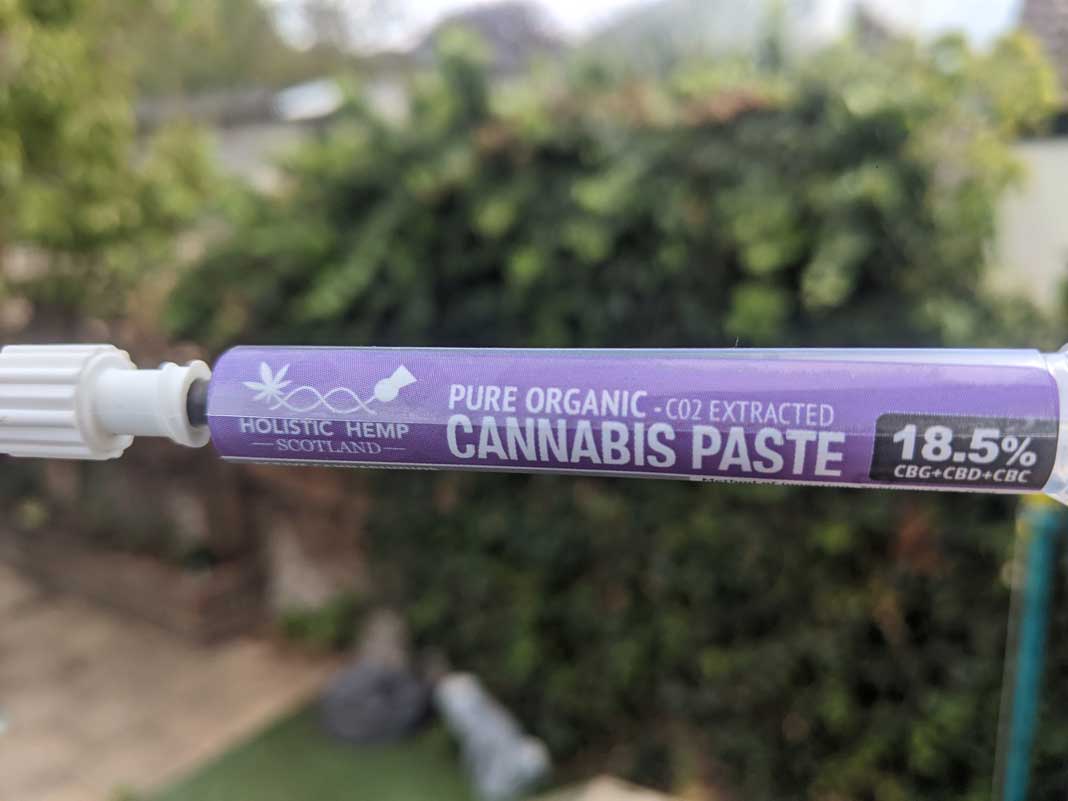 I’ve only reviewed one other cannabis paste to date, therefore this has been an empty area of the website that I’ve been keen to fill and was delighted when Holistic Hemp Scotland sent two different pastes. The first I’m reviewing is the organically grown cannabis paste, containing CBG, CBD and CBC.

How Much Of Each Cannabinoid Do You Get?

Most of the products I review are predominantly packed full of CBD, being the most popular cannabinoid (if we’re ignoring the global love for THC). However, this cannabis paste contains a significant amount of CBG.

CBG and CBGA are the most prominent cannabinoids present, which came to 183.7mg/g of the 213.6mg/g of cannabinoids found, making it 86% of the cannabinoids.

I’m a big fan of any product that is high in CBG, with an increasing number of studies on this intriguing cannabinoid. It’s normally rare to see high amounts of CBG, simply because the strain that is commonly grown and used is one that is high in CBD over other cannabinoids, however I can see strains high in CBG becoming increasingly popular, which should in turn bring down the prices.

The certificate of analysis showed that the batch also contained 20.3mg/g of CBD and CBDA, along with 9.6mg/g of CBC. If you’d like to learn more about the various cannabinoids then you can read through my list of the 113 known cannabinoids.

The certificate of analysis can be found on their product page, produced by Cannanalytical, which is always worth checking before ordering anything cannabis related.

The organically grown cannabis paste is extracted using CO2 extraction methods, leaving a solvent free paste, using no chemical fertilisers or pesticides at any point by the small EU based artisan farm. The cannabinoids remain at high levels thanks to the low temperatures and low pressure conditions they use during the CO2 extraction.

How Much Do I Use?

The syringe is pre-filled with the full amount of cannabis paste, so you have to be careful not to push too much out.

It can be hard to precisely measure out 0.1-0.2 grams when squeezing it out, while I’ve got a ‘trigger happy’ finger so I had to be careful when squeezing it out not to push too much into my mouth. I guess one alternative way could be to squeeze it onto a spoon and then suck the paste off the spoon to the bottom of your mouth.

As usual, you should take the paste sublingually, holding it under your tongue for 1-2 minutes. I’d recommend avoiding touching the inside of your mouth with the syringe, to ensure no bacteria is spread and it remains clean and hygienic. If you do, you might want to dab the end to ensure it stays clean.

You can purchase the Holistic Hemp Scotland 3g Organic CBG Cannabis Paste from their website for £33. If you’d prefer to upgrade to a 5g paste, it will cost a clean £50.