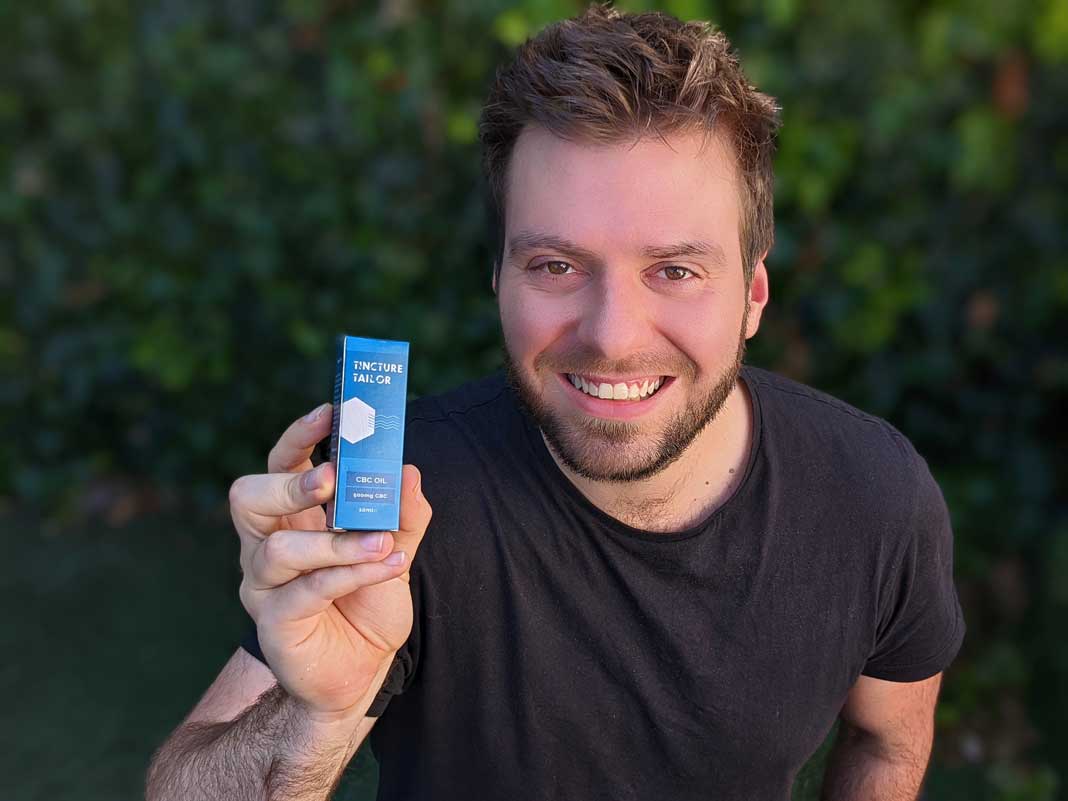 Don’t get me wrong, there are small amounts of CBC in many of the CBD oils I’ve tried if they’re full or broad spectrum, but we’re talking not much more than trace amounts, so to try this was truly exciting.

CBC is the abbreviation of cannabichromene, one of the many cannabinoids found in cannabis, while it’s also considered non-psychoactive.

As you may know, there are more than 100 cannabinoids so far recognised in cannabis, I say so far as findings are still being made to this day as we learn more about this mysterious plant.

The focus in the industry is predominantly on CBD oil, which I have reviewed hundreds of, while CBG oil is also a growing area, of which I reviewed the Tincture Tailor CBG oil just a couple of weeks ago, being one of only 5 I have tested out, but this is the first CBC oil I’ve tried.

How Much CBC Do You Get?

Each bottle contains 500mg of cannabichromene, which the lab report supports, actually showing 512mg in the batch test, which matches the batch I have received.

This is a CBC isolate, meaning you won’t get any other forms of cannabinoids present in the bottle. You can find the lab report on the product page, under ‘Certificate of Analysis’ (the other term for a third party lab report).

What’s The Dosage Recommendations For CBC?

Considering this is the first time I’ve tried a CBC oil, I did some research before trying this myself and offering any advise out.

From every source I could find online, it mirrors the guidance of when taking CBD oil, much like CBG does, meaning you may want around 20mg when starting out, while you should avoid going over 70mg in a day (being the general FSA guideline).

Tincture Tailor recommend 2-4 drops when starting out, however I’m useless at counting drops when they land in the mouth, so instead I preferred to use the markings on the dropper, as the 0.3ml line would mean I’m consuming 15mg of CBC.

Just in case you were tempted by the 0.5ml line, this would work out as 25mg of CBC.

Considering CBC’s interaction with TRPV1 and 5-HT1A receptors, I decided to take this at a slightly different time to my usual CBD consumption, being an evening ritual for myself an hour before bed.

I instead took it post-workout for it’s supposed inflammatory pain relief potential, as well as in the morning to test against stress reduction, as I’m in the process of buying a house and trust me when I say my stress levels are through the roof.

While it’s hard to prove causation rather than correlation, I can say I recovered perfectly for my workout the next day each day during testing, without the pesky rotator cuff aches, while I also felt mellow during stressful calls.

Does It Have A Flavour?

No, this product isn’t flavoured. As an isolate, you won’t find the strong aftertaste that some broad or full spectrum cannabis oils will have, meaning the flavour of that ingredient is non-existent.

The taste you do get through is the MCT oil, derived from coconuts, so unsurprisingly it has a slight taste of coconut oil.

I’m sure down the line there might be flavoured CBC oils, just the same as with CBD oils, however in general I recommend forgetting the flavour and focusing on the product that offers you the greatest results.

How Does It Come Packaged?

The CBC oil mirrors what you’d expect with a CBD oil and with the rest of their range, being in a 10ml bottle, with a dropper containing markings up until 0.5ml.

In fact, the pack fit perfectly into a box which they sent out which contained five different products from their range (keep your eyes peeled, as there may be some more exciting reviews to come).

What Are There Future Plans?

Being such an innovative brand, it will be fascinating to see what areas they invest their time and resources into and how the brand grows with new product launches.

They are already researching and experimenting with new ideas and ingredients (they’re pretty excited about functional mushrooms and adaptogens to combine with cannabinoids and terpenes to further tailor results with natural supplements).

It is important to Cat and Andrew to source the very best materials in a sustainable way. Their products all use vegan, organic MCT oil to ensure maximum bioavailability with high quality third party lab tested cannabinoids and terpenes, so they need to ensure that high standard remains as the range grows.

They will only introduce products that are really going to work and that fit into the tailoring approach to dosing.

Cat and Andrew feel passionately about natural wellness instead of pharmaceuticals where possible and also raising awareness to fight the stigma around cannabis based health and wellness products!

You can order the Tincture Tailor CBC oil from their website for £65, while if you have the budget, you can order their Original TT Cannabis Kit, which contains all five products in their range, for £200 (individual prices would be £224).