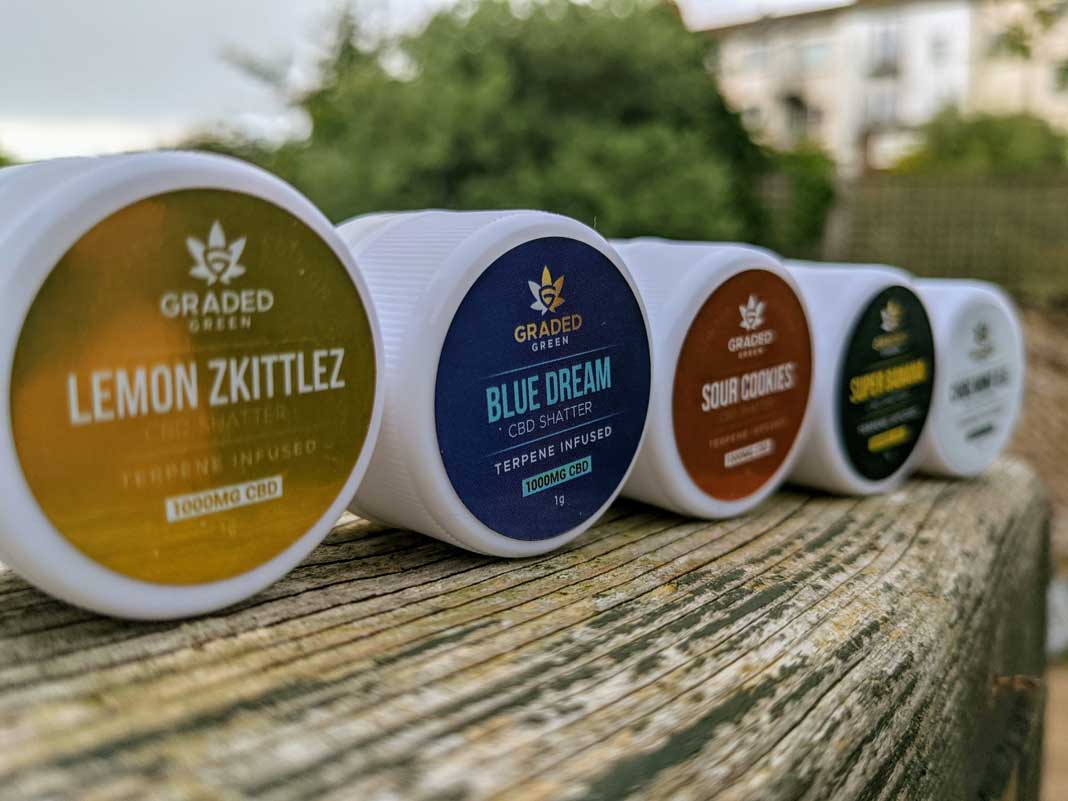 Recently I’ve been taking a look at something a little different to my usual CBD oil or gummies, with the Graded Green CBD Shatter taking the role of my next test subject.

This Liverpool based cannabis brand has a growing product range, covering extracts, CBD oil and e-liquids. Concentrates are becoming increasingly popular in the UK, with dabbing offering a great way to administer a potent level of CBD into your system.

What Flavours Did You Test?

I was lucky enough to be sent over 5 different options and you bet your bottom dollar I tried them all!

To start with, I gave Sour Cookies a try, a limited edition CBD shatter.

When you go through to the product page, you can see which terpenes have been infused into these products, so if there is a specific terpene which you really enjoy the taste or aroma of, or have read up on the specific benefits to that terpene and want to try it, you can check to see if it is present in this flavour.

So for the Sour Cookies, the most prominent terpenes were beta-pinene, terpinolene, myrcene, beta caryophyllene and alpha humulene.

The scent was very sweet, almost like a pineapple aroma, while it was very smooth as well.

The dominant terpenes were valencene, humulene, limonene, myrcene and beta-caryophyllene.

Valencene is most commonly found in Valencian oranges and provides a sweet and citrusy scent.

The third was the Choc Mint O.G., which had a menthol taste and was high in caryophyllene, which is known to add a peppery / diesel smell.

Next up was Blue Dream, which I was a huge fan of, but I couldn’t put my finger on what the taste reminded me of, potentially a blueberry flavoured fizzy drink from childhood.

Lastly, but by far my absolute favourite, the Lemon Zkittlez is another limited edition option like the Sour Cookies, which would be a shame to see go considering how nice it smelt.

The zesty lemon flavour perfectly combines with a sweet note, making this go down a treat.

Obviously, I’ve spoken about the flavour, but you should closely look at the terpene profile and pick largely based on the effect you’re seeking.

Why Choose A CBD Shatter?

These CBD shatters contain 99% CBD, making it very much an isolate, ideal for those that purely want CBD without the presence of other cannabinoids.

According to the lab reports, you also get 0.3% CBDV, meaning the total cannabinoids comes to 99.3%.

The shatter comes as a hard texture, but is very easy to break up and ‘shatter’, hence the name. Honestly, you will get the same potency whether you choose a shatter, wax or crumble, so it’s more down to your personal preference.

Considering the price, this makes it a much more affordable way to get CBD when compared to the traditional methods of oils or gummies.

Realistically, the reason CBD shatter isn’t more popular or commonplace is because they’re a little more difficult to consume than simply dropping some oil under the tongue or having some hemp tea.

On the other side, some people require zero THC, especially if they’re drug tested for work, so having an isolate can offer some more reassurance, but it is always worth checking the lab report to be careful.

How Do You Take The Graded Green CBD Shatter?

There are a number of ways in which you can take CBD shatter, such as by vaping or sublingually. I opted to test them out using the Niiceone Portable Vaporizer.

It’s an unbelievable piece of technology, but always takes me a while to remember my way around this vaporiser and what all the buttons do when I haven’t used it in a while.

The most common way to take CBD shatter is through dabbing, which involves flash vaporisation, where you inhale the CBD vapor.

If you’re trying CBD shatter for the first time, remember you really only need a very small amount. The FSA recommends no more than 70mg of CBD in a 24 hour period, which is a very tiny amount of the shatter, considering the little rock comes to 1,000mg.

If you’re not sure what to order or you’re new to CBD, you may also want to check out their starter kit. If you order by 3pm on Monday-Friday then they will dispatch on the same day, with the delivery handled by Royal Mail and UPS.

Make sure to keep an eye out for my upcoming review of the Graded Green CBD Crumble!