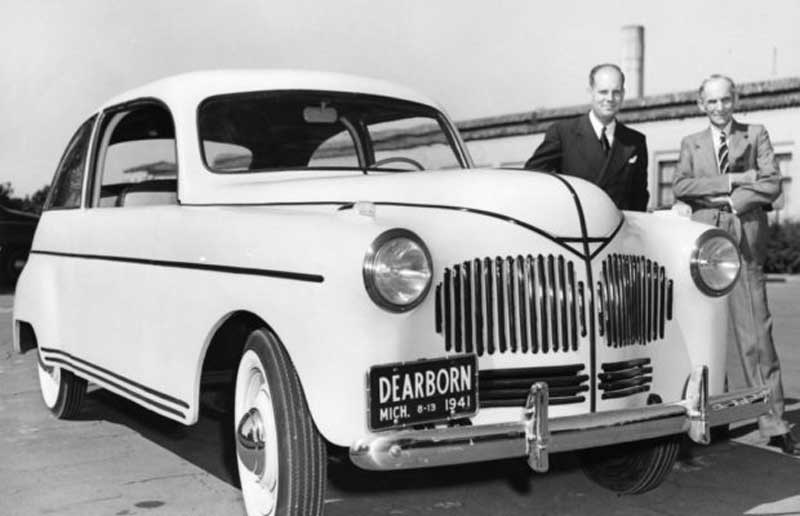 The American automobile manufacturer Henry Ford was made famous for introducing an assembly line model of production, as well as introducing a practical and affordable car for the masses to enjoy.

He was seen as a visionary, he revolutionised the car industry and sold millions of Ford Motors. But one of his ingenious inventions slipped largely under the radar, the hemp powered car. So read on to find out more about this interesting contraption.

When Was It Invented?

Henry Ford presented the hemp fuelled car in 1941, purely as a prototype, made partly from cellulose-plastic. This followed 12 years of research before creating the prototype.

So Was It Built From Hemp?

This is a slight misconception, through articles stating exaggerated details, as only around 35% of the car was believed to be built from hemp.

However, this was a far cry different from the current standard of comparable models of cars, which were built largely from steel.

The car was built from flax, wheat and spruce pulp, as well as hemp.

Why Did Henry Ford Create The ‘Hemp Car’?

Cars were not commonplace on the roads at this point, only the wealthy could enjoy a luxurious drive, whereas Henry saw a significant increase in popularity for the automobile and knew he had to appeal to the masses.

The concept of a hemp powered car was much cheaper than the steel models. But on top of this, his rudimentary safety checks showed it had the potential to be a much safer option as well.

Wielding an axe and punching into the prototype, he demonstrated how the panel didn’t change or dent, whereas when smashing a steel panel car with an axe, it pierced straight through.

It was also stated in the New York Times back in the 1940’s that ‘the plastic material would absorb a blow 10 times as great as steel without denting’.

Another factor which motivated Henry Ford was that the agricultural industry was struggling on its knees at the time and the use of hemp would have helped farmers up and down the country. This was the era that followed the great depression, which started in 1929 and ran for a decade till 1939, hence what inspired him to contemplate a lower cost option that could help farmers.

What Fuel Would It Run On?

The idea was that it would run on ethanol produced from vegetable and seed oils from a combination of sources, one of which was hemp.

The concept was a strong one and Henry Ford saw the future of automobile fuel being vegetable oil based, however the gasoline industry lobbied against this with an intense amount of financial backing.

The lobbying was ‘successful’ for the oil, plastics and paper industries, which saw hemp as a huge threat, leading to it being outlawed in 1937, which put a massive spanner in the works and meant this remained just an idea.

Did This Stop Henry Ford?

Not initially, no. Henry Ford illegally grew hemp in order to run his tests, but despite his findings, it became impossible to mass produce a vehicle which was based on an illegal substance.

Will Hemp Cars Be Made In The Future?

With the relaxing of rules around the growth of hemp, it is much more plausible that this could be introduced to the market, however the automobile industry is so well established, it would be difficult to envisage.

The carbon footprint of these hemp cars would be at the very least carbon neutral, if not carbon negative, compared to the 10 tons for the standard manufacturing of a car, means you can see people moving this way as they try to reduce their carbon footprint.

The reality is that the cost of producing a hemp car, based on early prototypes, is incredibly expensive compared to the current models on the market. The profit seeking car companies are unlikely to go after this, unless someone does it first and proves that the demand is out there.

We may however see hemp introduced in car designs, used in the upholstery and body, but that might be as far as it goes.

8 Reasons Why CBD Isn’t Working For You?